Food Redistribution starts getting Recognised in Brighton and Hove

All photos by David Ashwanden


This past month has seen some great achievements from the Food Waste Collective in terms of raising awareness of our activities and helping to inspire others to do the same. We were nominated for newspaper the Argus’ Green Project of the Year Award (1) by Brighton and Hove Food Partnership and Tai Ray-Jones (many thanks to them), and although we did not win being shortlisted was an achievement in itself.

Community Stars
It seems to be the season to be awarded things; just a couple of weeks later we were invited to another awards ceremony, the Community Works Sector Stars Awards (2) held at the Brighthelm Centre on North Road. This time the FWC was nominated for ‘Small Group, Big Achiever’, sharing the awards ceremony with a plethora of exciting projects from community gardens such as Moulsecoomb Forest Garden (3) to support networks such as Grassroots Suicide Prevention (4) and creative projects such as Sing for Better Health (5). 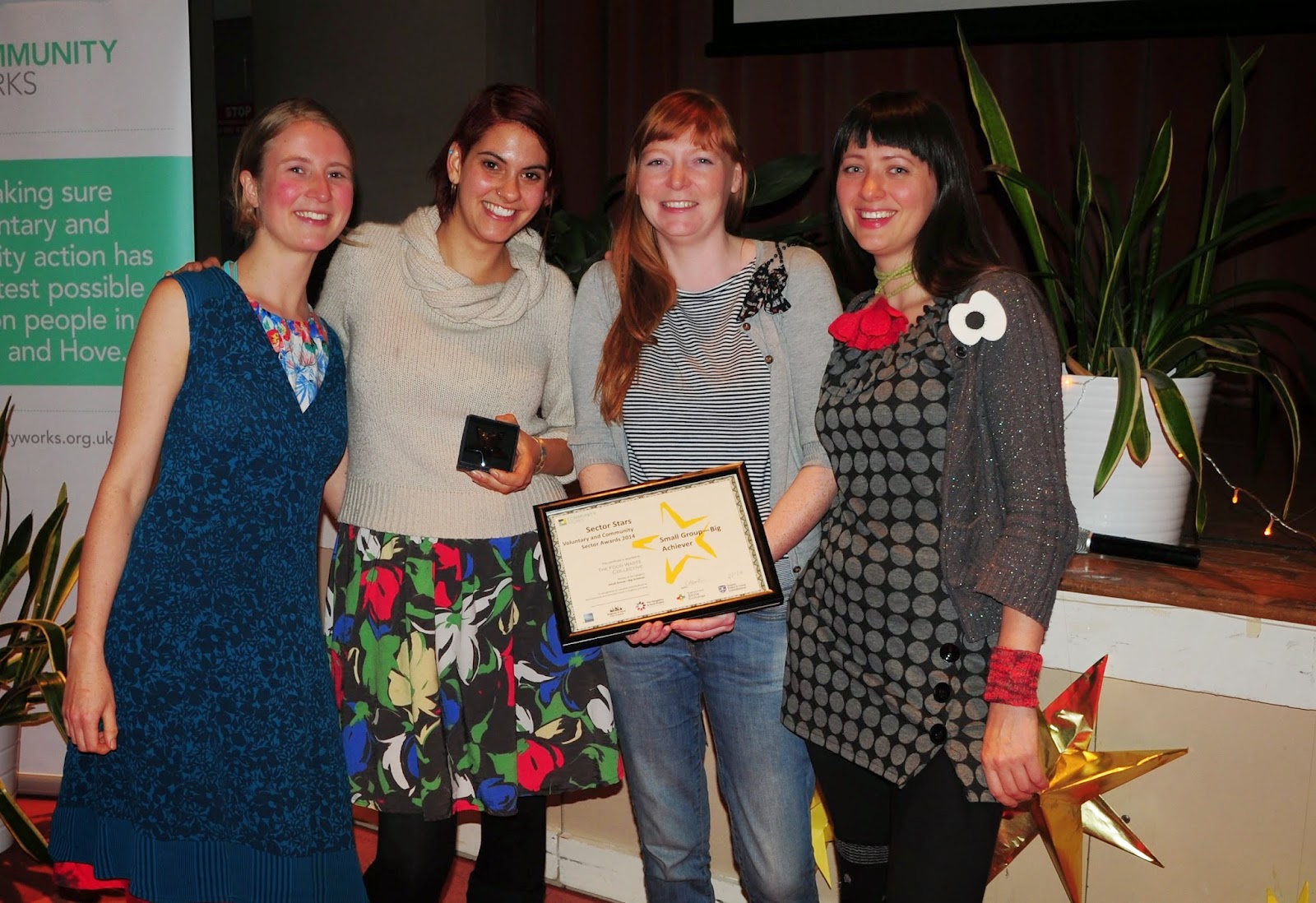 As people generally interested in food and healthy eating the Food Waste Collective representatives – Vera Zakharov, Martina Mina, Caitriona Donohoe, me (Charlotte Haworth) and our Food Project Photographer David Ashwanden – were very pleased with the catering at the awards event, which was all vegan and gluten free. In spite of (or more likely because of) this, it was all also incredibly tasty. 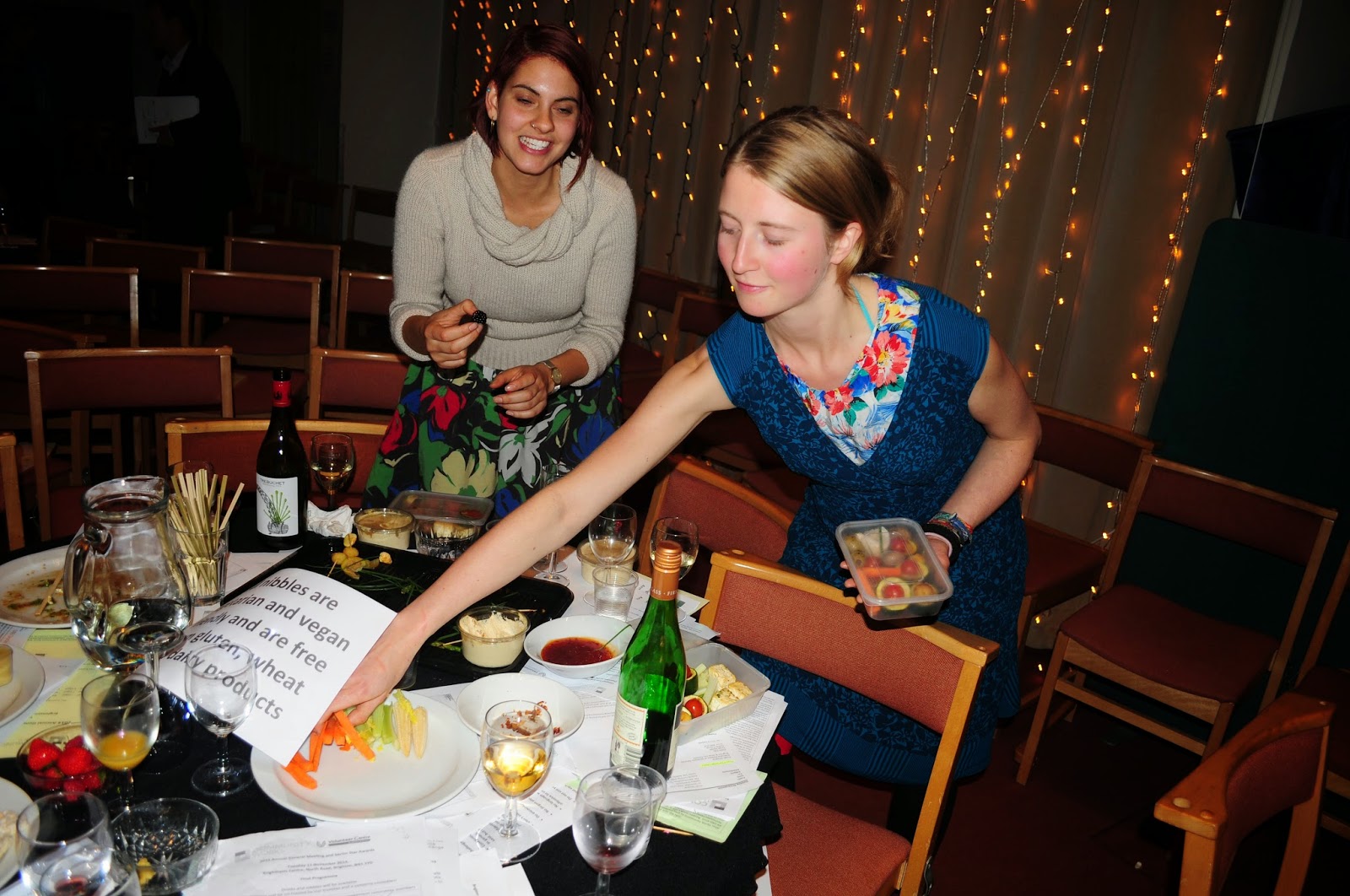 Having partaken in the fabulous fare we settled down for the announcements of the winners, hearing many inspirational stories of groups around the city as the evening went on. Then it came to the ‘Small Group, Big Achiever’ category; and the winner? The Food Waste Collective! 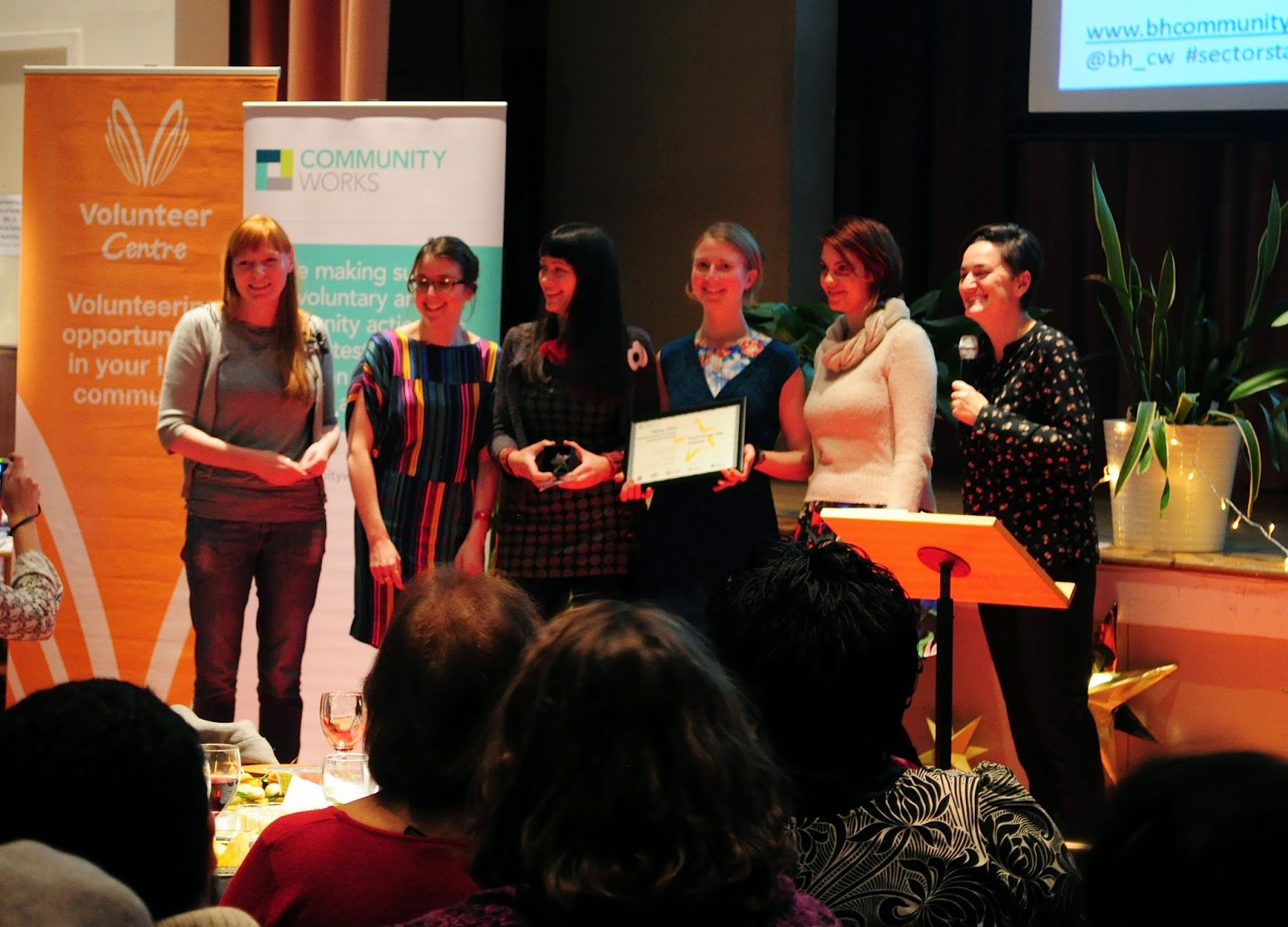 We felt our award was justified by some of the information we shared about the FWC’s activities; for example, how we have helped to redistribute five tonnes of food which would otherwise have gone to waste. Neither the award nor the redistribution would have been possible without the support of Community Works, and of course of our parent group, Hanover Action for Sustainable Living (HASL) (6). 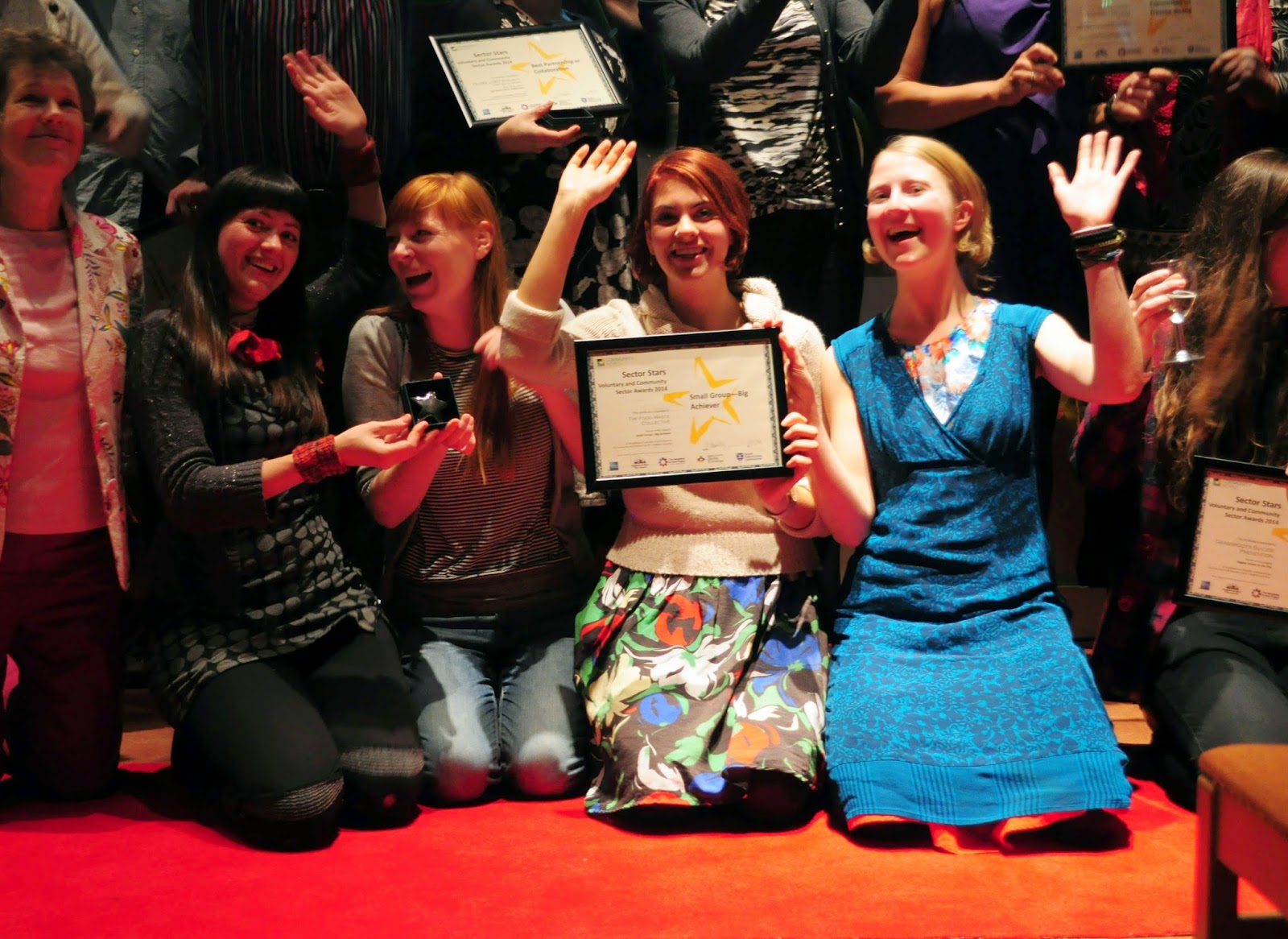 More redistribution
This ‘five tonnes’ figure has since risen; last Monday 24th November saw our winter Good Food for Good Causes (GF4GC) event, during which we managed to redistribute just under two tonnes more of food, mainly dry goods such as flour, lentils and barley donated by Infinity Wholesale, as well as fruit and vegetables from TG Fruits and bread and pastries from Real Patisserie. 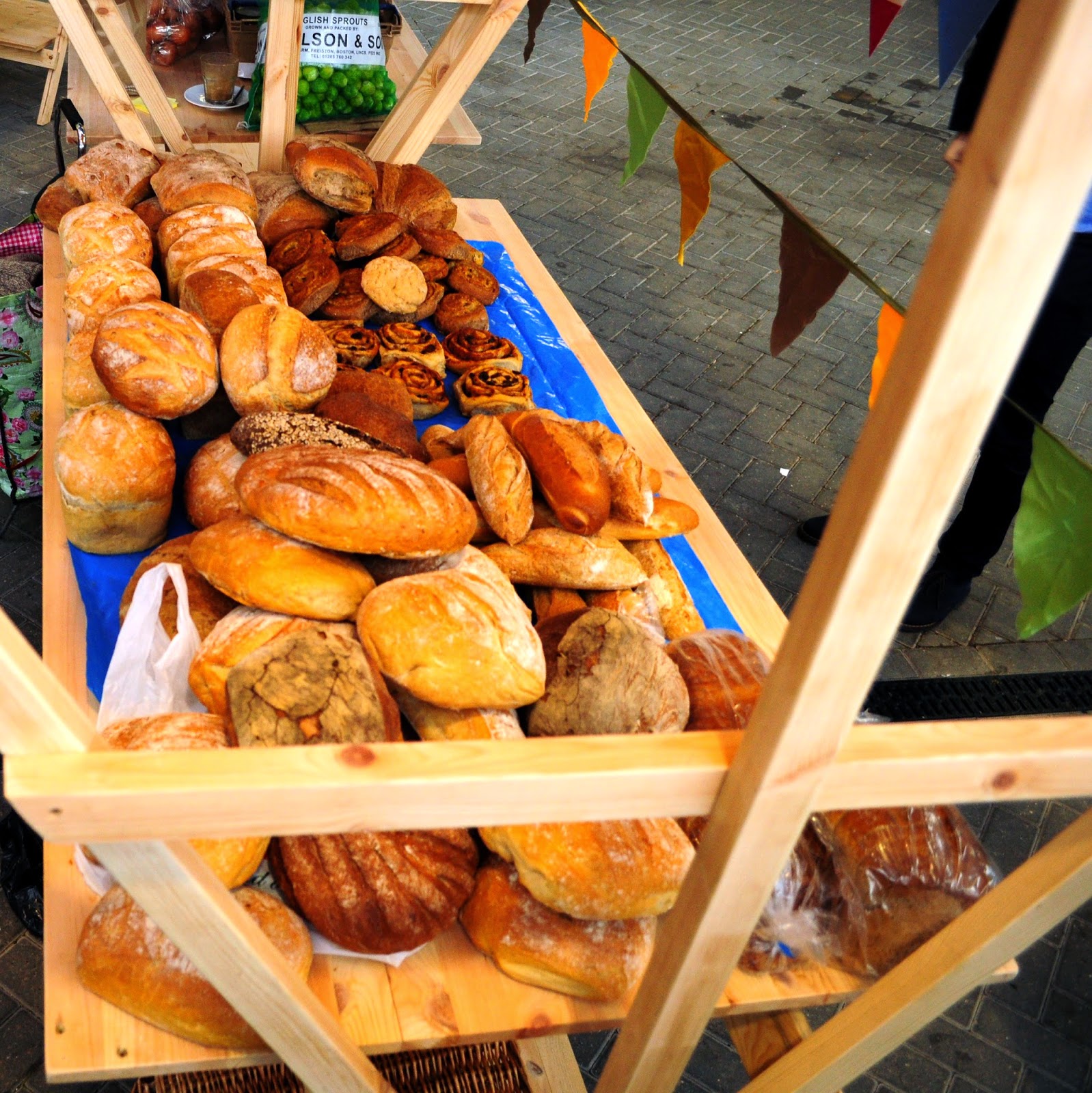 This was the first GF4GC we have held in the Open Market (7), which is a much more public space than the old Municipal Market which we have previously used. The public aspect meant that as well as helping out the approximately 30 charities and community groups who came to receive food on the day, we also had an information stand to help inform unsuspecting members of the public about our work. 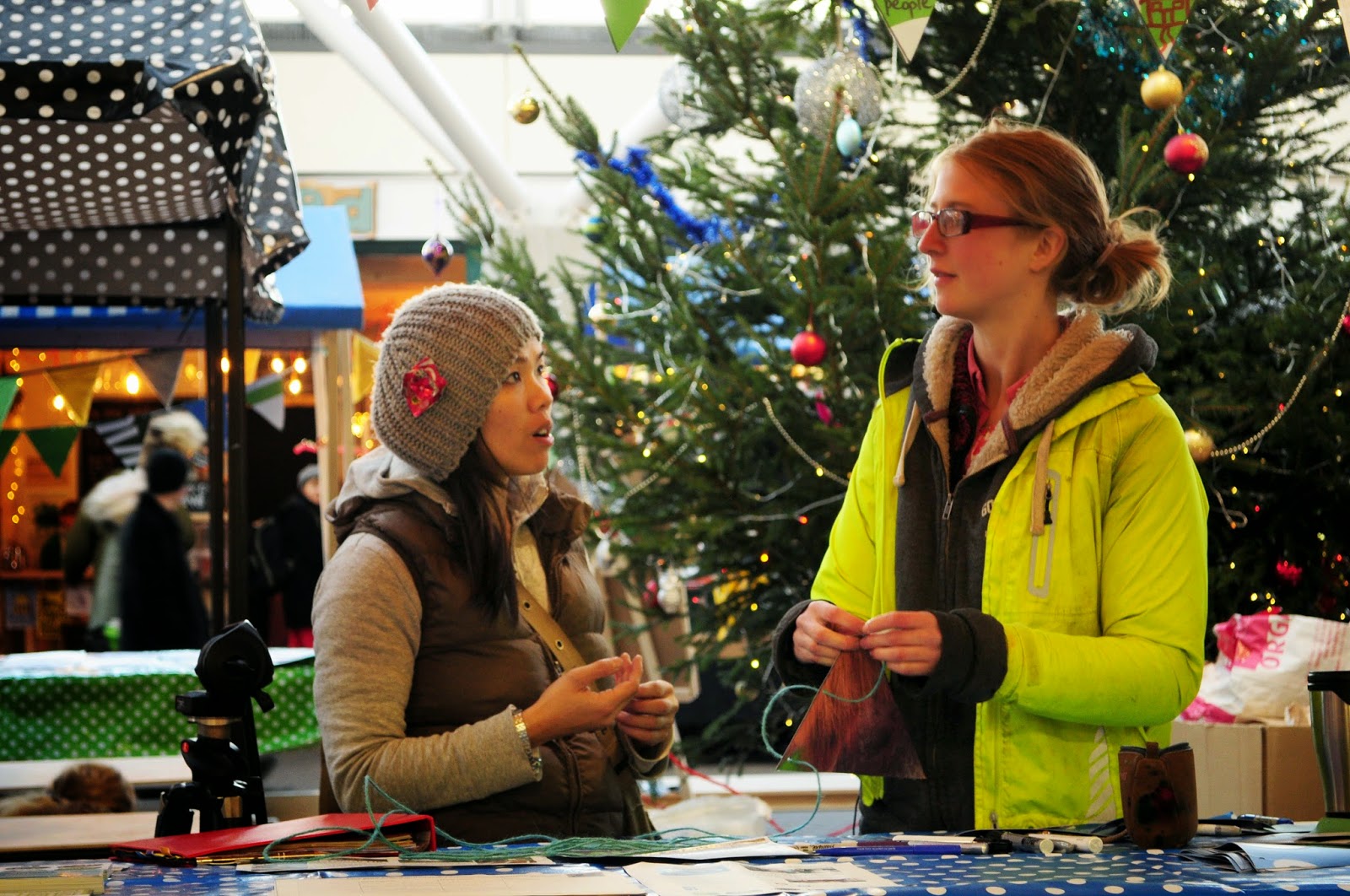 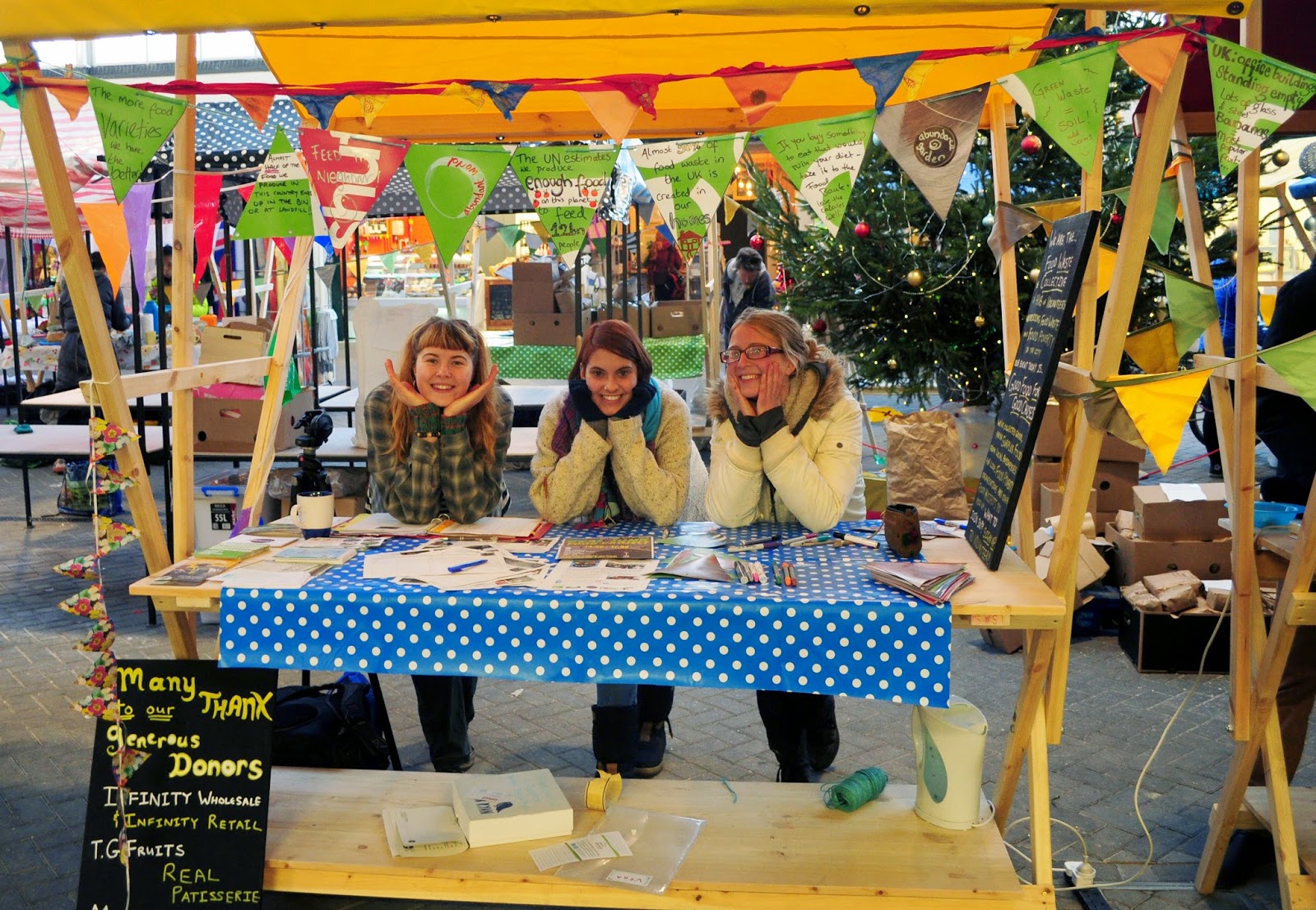 To aid us in the public relations aspect we came up with the idea of ‘interactive bunting’: bunting triangles which members of the Food Waste Collective Craft Contingent had decorated with various food facts, statistics or inspirational messages and strung up around the redistribution area. The ‘interactive’ aspect was that, with the aid of permanent markers and paint pens we were encouraging volunteers, recipients, and random passersby to make their own food-inspired bunting triangles. The results ended up being rather beautiful. 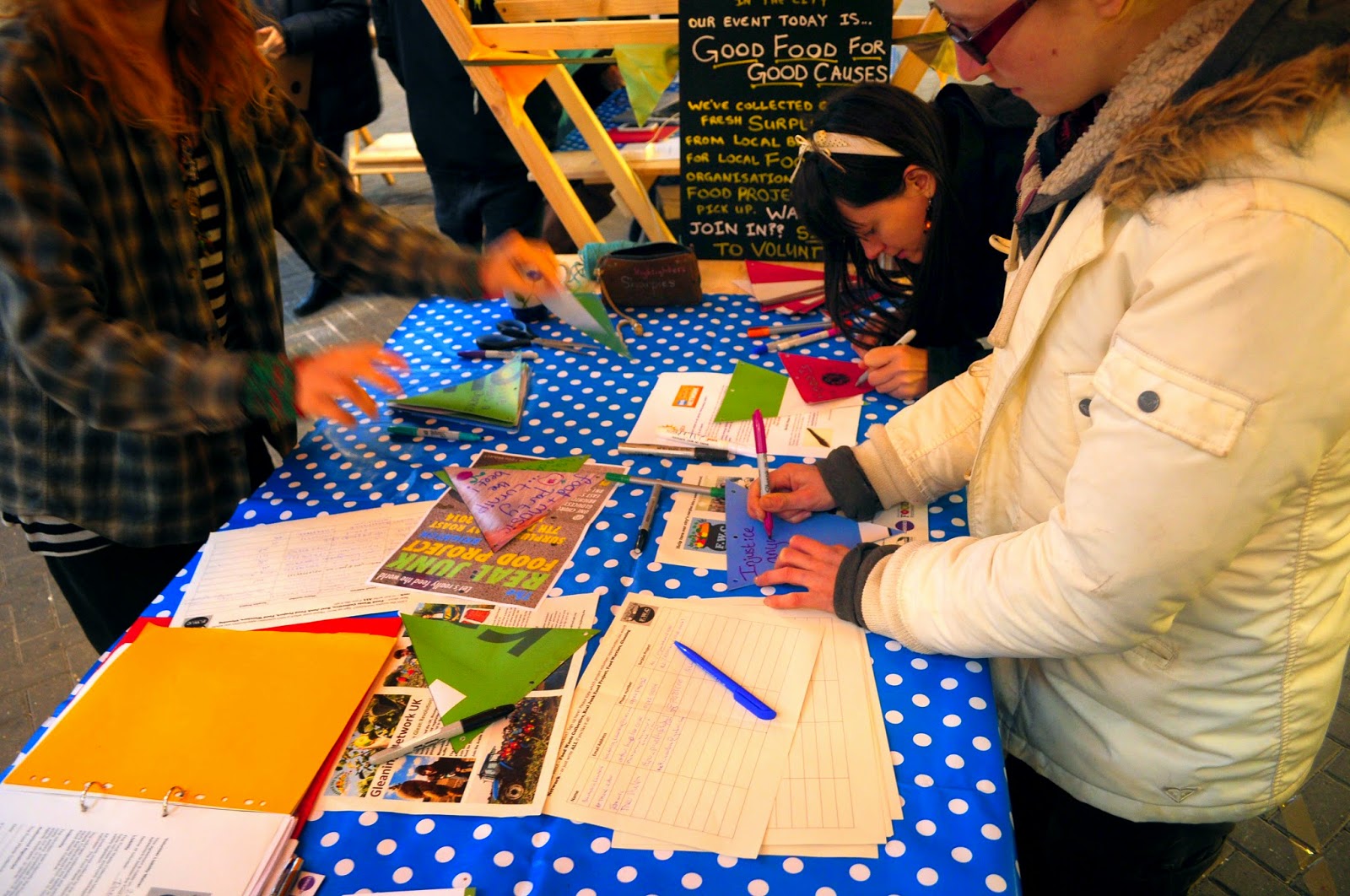 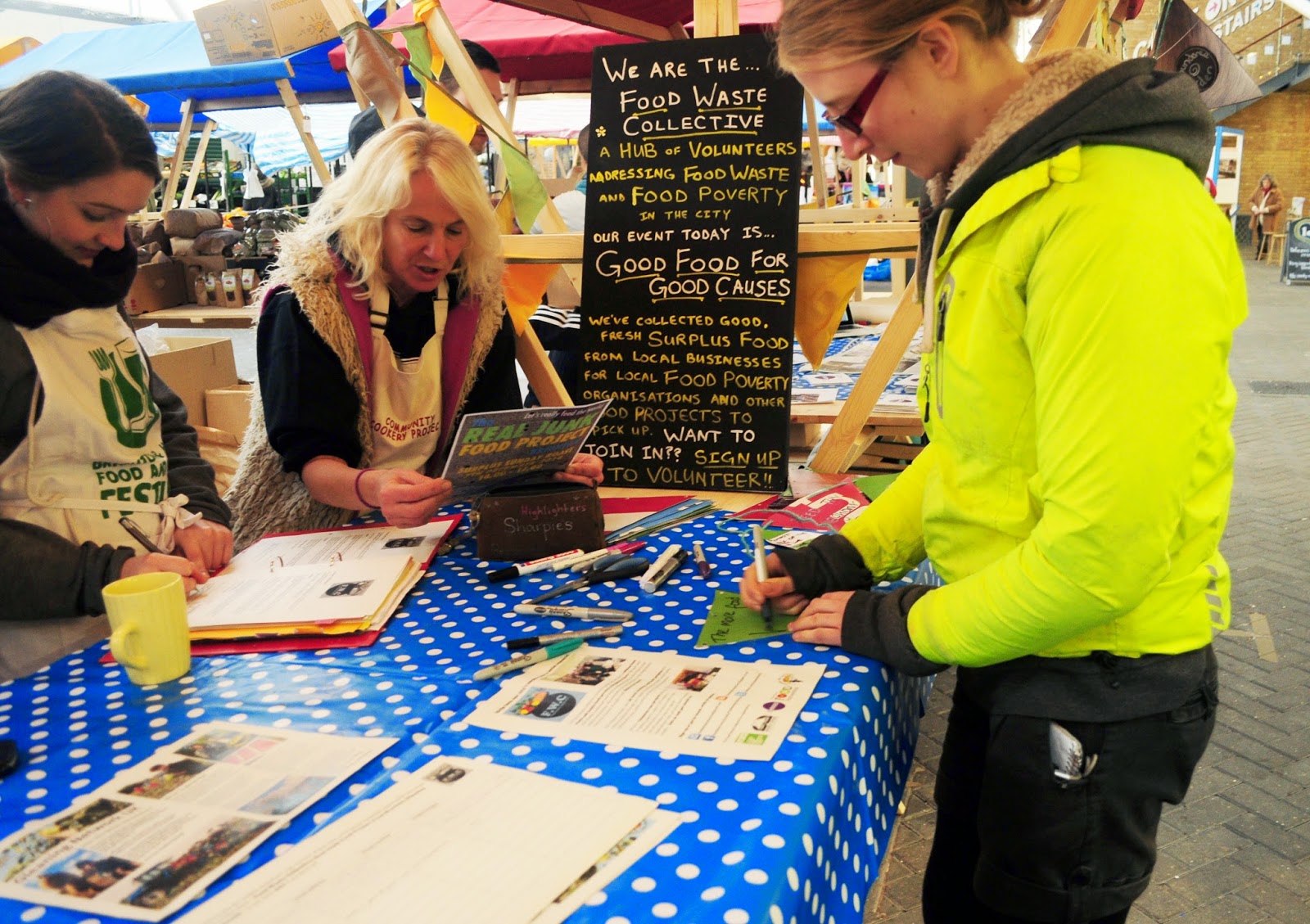 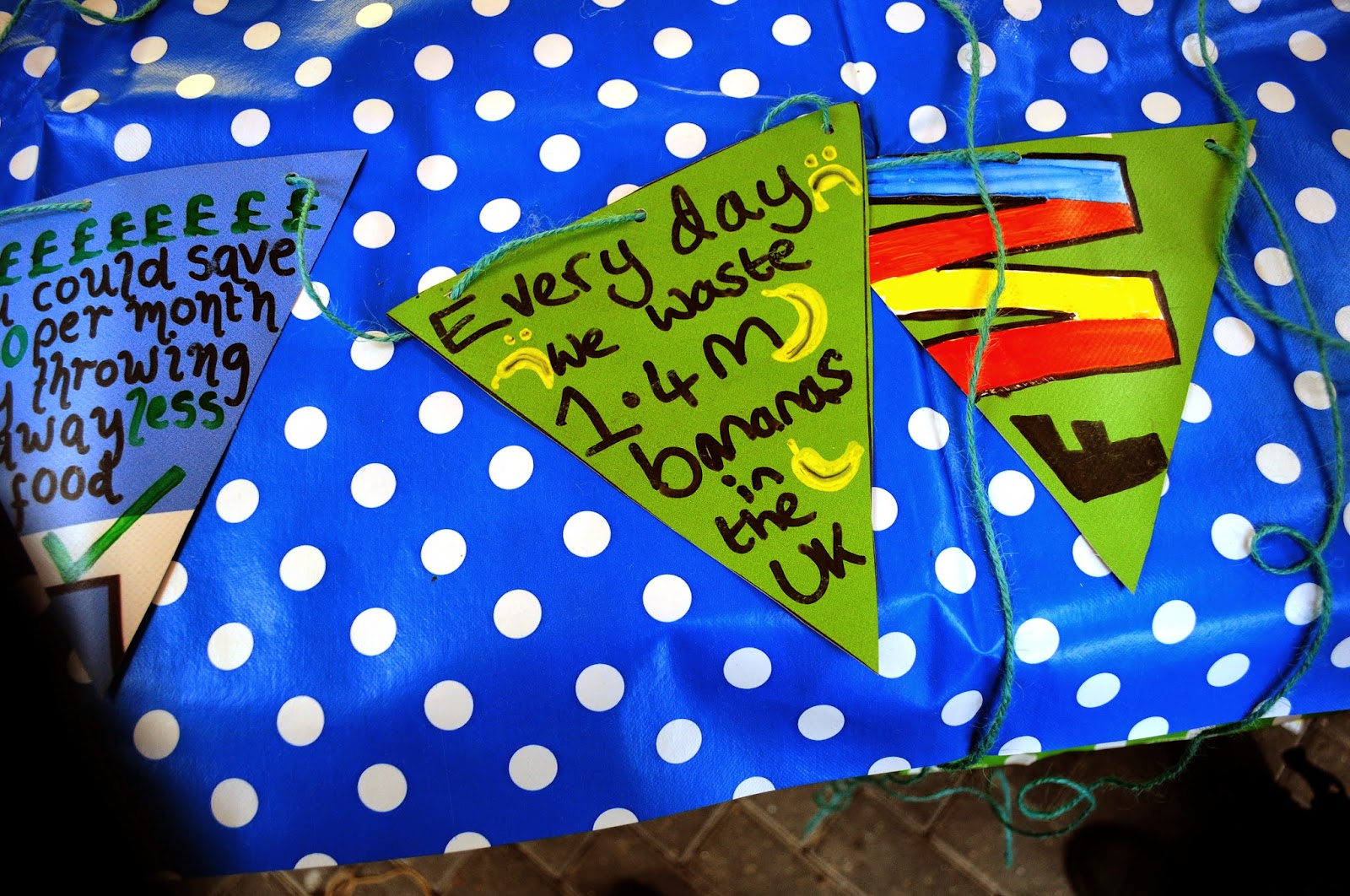 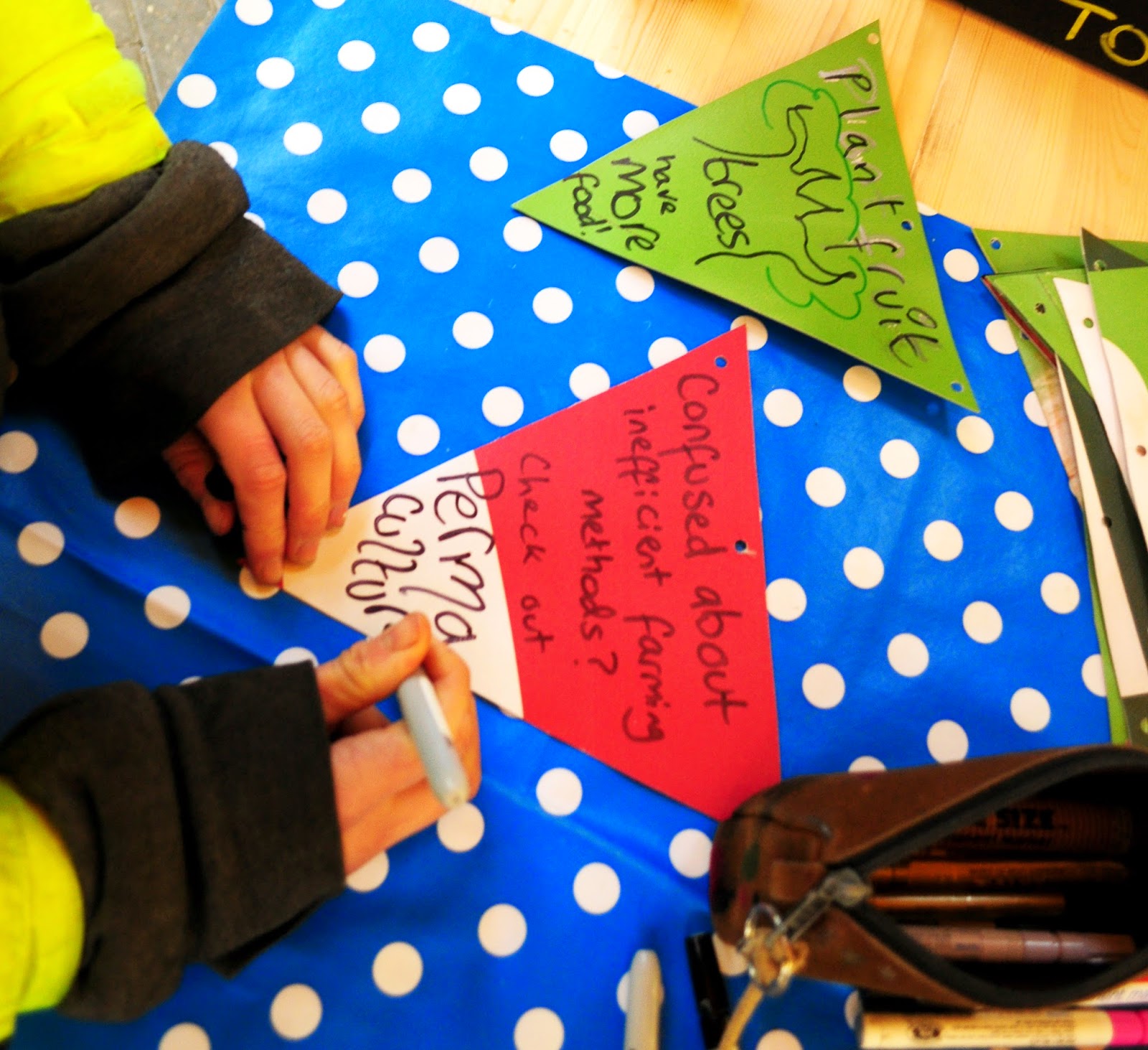 Another great thing about doing the GF4GC in a more public place was that we could share with the public all of our partner organisations such as Plan Zheroes (8), the Gleaning Network (9), Food Warriors (10) and Brighton’s newest food redistribution organisation, the Real Junk Food Project (11), who had their very first event last Thursday at Theatre Uncut (12), a series of free plays with free intercepted-food hot dinner from the Real Junk Food Project, with proceeds split between the Project and Amnesty International. 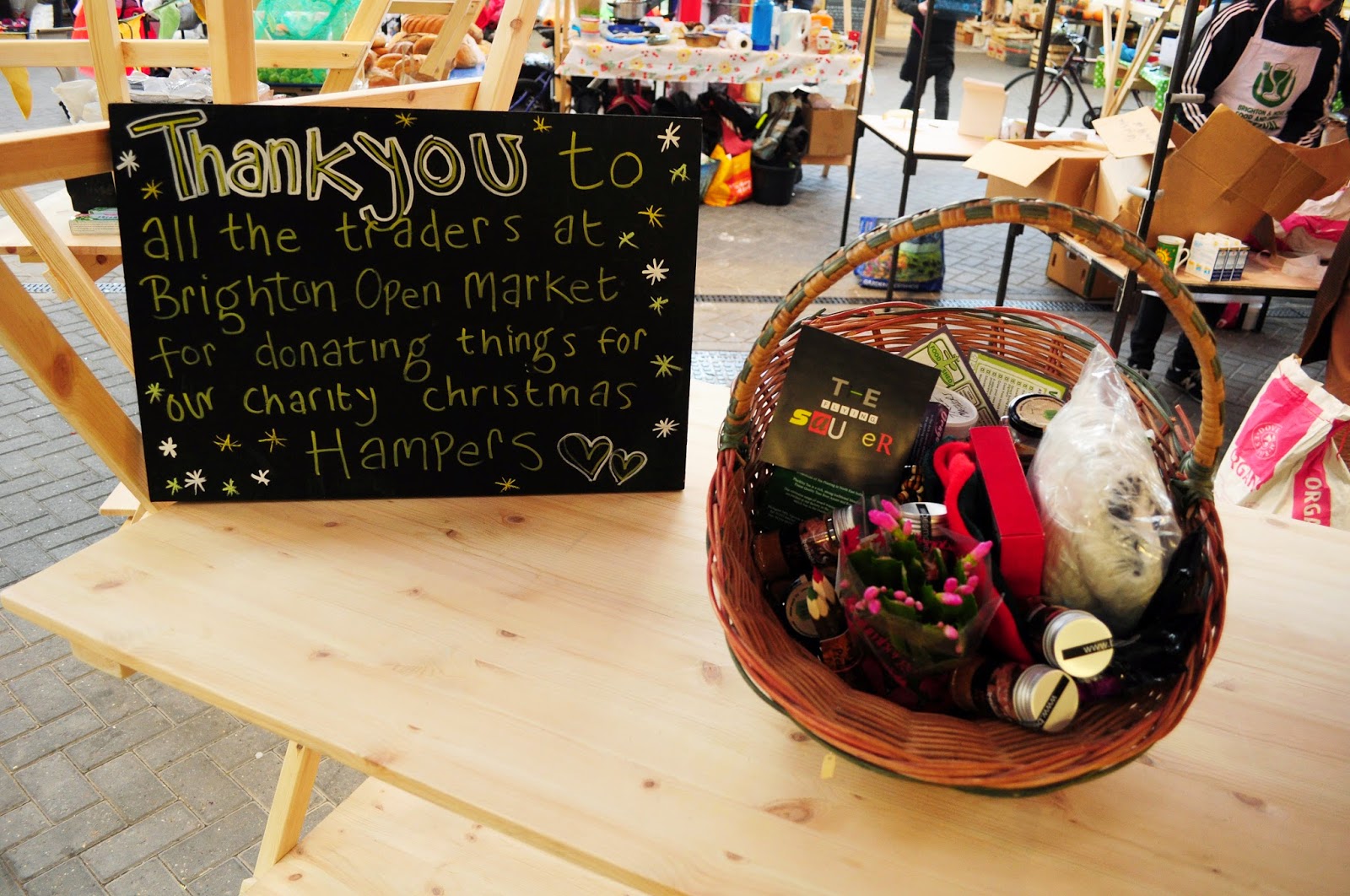 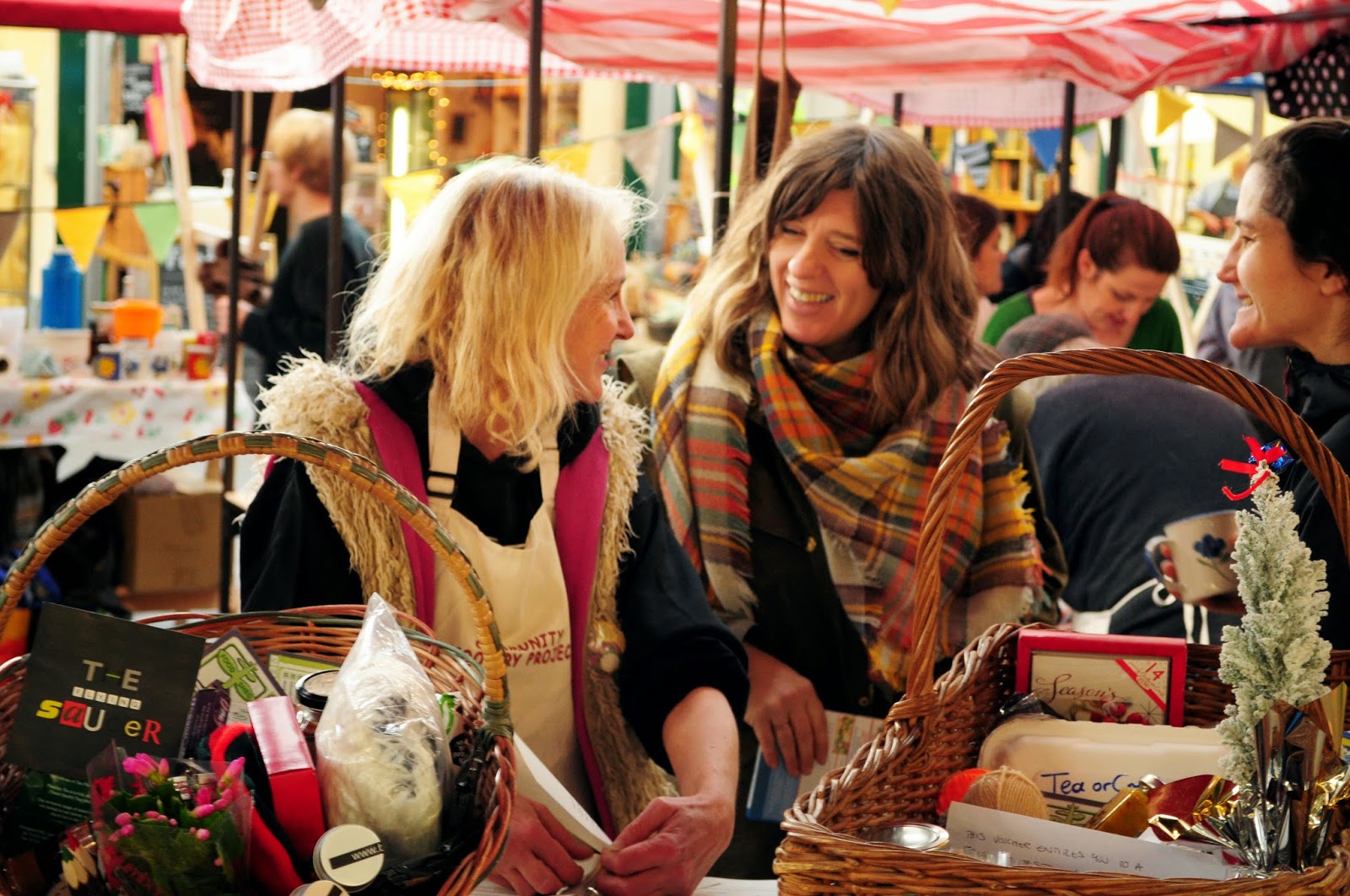 The Open Market traders was in a generally celebratory mood, with every single trader there donating a high-quality foody gift to our festive hamper, which we entered every volunteer and charity representative into a prize draw to win. 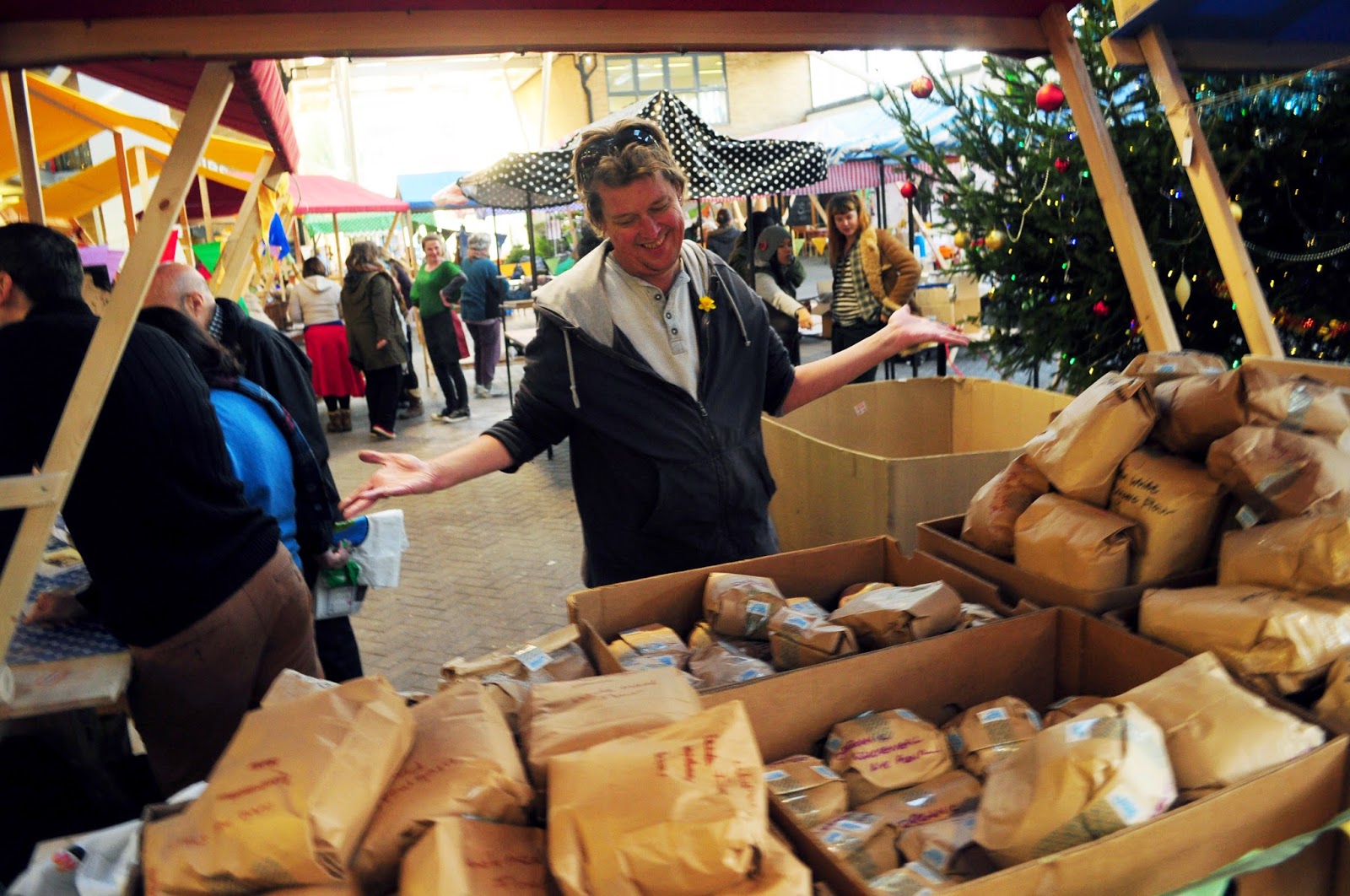 All in all, a rather successful month, with lots of happy Brighton and Hove residents now able to feed themselves better, and many more feeling inspired to take action to tackle the incongruities between the large amounts of food being wasted in the city, and the large number of hungry people here. 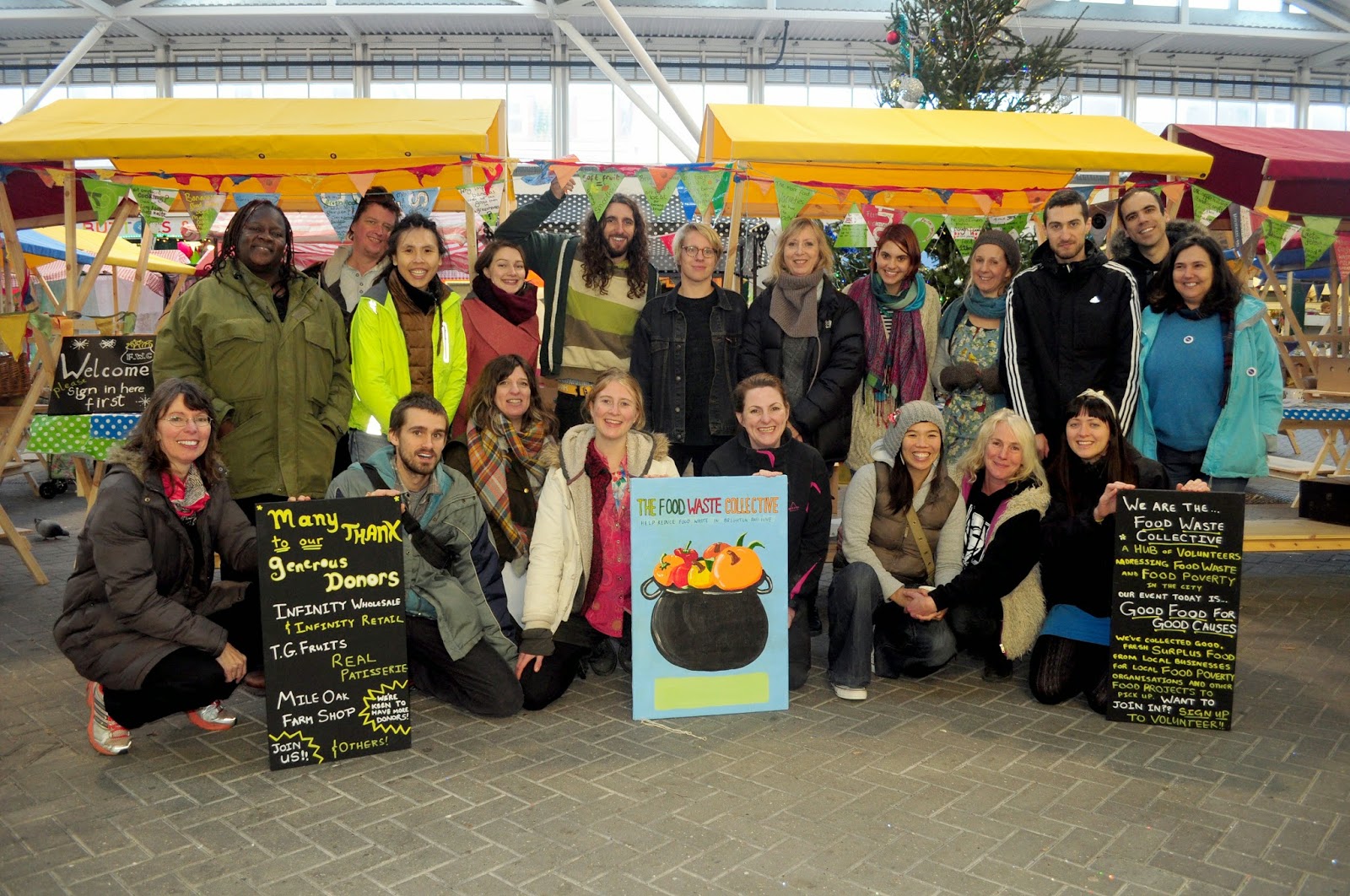 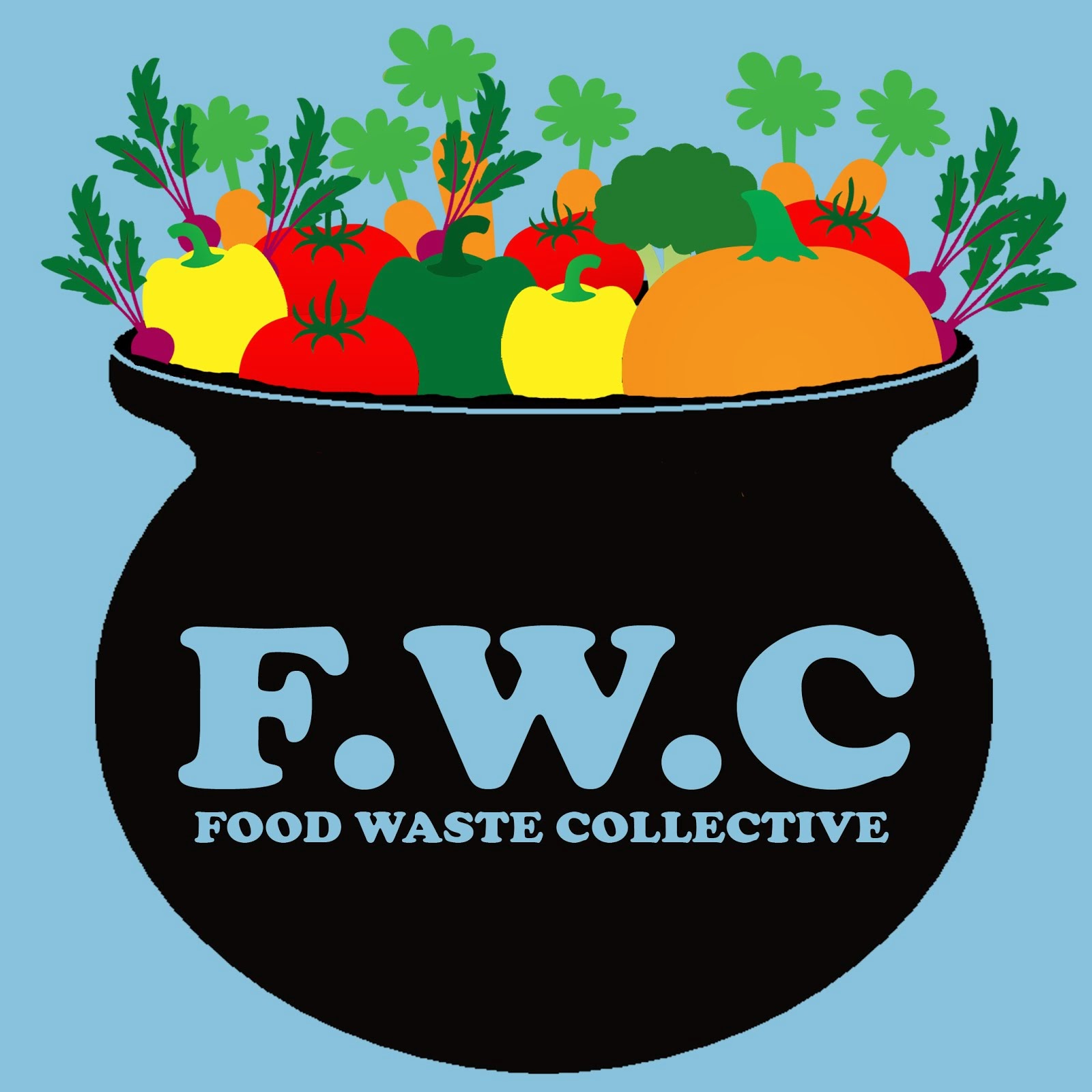 The Food Waste Collective is a hub for people who are passionate about addressing food waste in Brighton & Hove. We work to support sustainable, ethical alternatives for the tonnes of perfectly good food that is thrown away from retailers, businesses and farms every year. The Collective hosts community actions, talks and social events, as well as supporting other local initiatives tackling food waste in Sussex. We are a sub group of Hanover Action for Sustainable Living.

For all the latest news, actions and events, please follow by email: